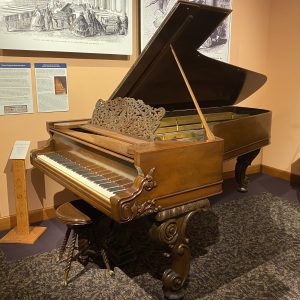 In January 2003, Steinway & Sons launched a promotional campaign celebrating their 150th anniversary. Between January and June 2003, they were in search of the oldest surviving upright and grand piano in private hands, with a reward of a full restoration or trade for an equivalent new piano by Steinway to the contest winners. Square pianos were deemed obsolete and were disqualified from entry, though a nod was given to anyone with a very old one, which would be printed at the announcement of the winner.
The family of Harold and Virginia (Ginger) Krueger heard about the contest, and Steve Bird of Steinway Piano Galleries in San Antonio, accompanied by Charles Ball, RPT, inspected the piano. Steinway and Sons validated the piano’s age via some digital pictures, and the piano won the contest, just in time for the awards ceremony at Carnegie Hall on Thursday, June 5. This win kicked off a series of discussions with Steinway, Christie’s Auction House, and others, resulting in the piano being listed for $10 million!
In 2017 the family began to look again for a home for the piano, and the author was drawn into the conversation by several curators across the country, with the then-new Carolina Music Museum as a possible candidate institution to take it. Negotiations progressed through 2018, and in early 2019 a deal was struck, which was made possible by former CMM Board President and CMM co-founder Steven Bichel, who would become the legal owner of the piano. It was brought directly to the Carolina Music Museum for display and study.
When it was first sold, the piano was shipped from Chicago, Illinois, by Gustavus Meyer in 1859/1860. A high-wealth individual in Lexington Missouri, he is in the 1870 US census listed as “Grocer” and from Hanover.
The piano passed through the same family to Virginia and Harold Kruger in 1984, and they were the last of the family to own the piano. 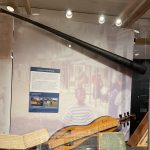 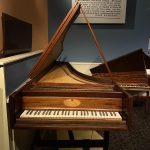