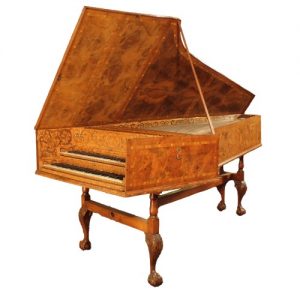 According to the leading expert on harpsichord decoration, Dr. Sheridan Germann: “No more magnificent British harpsichord survives than this 1761 Jacob Kirkman, which was formerly Queen Charlotte’s (wedding present from King George lll), and was played by the 9 year old Mozart for the royal family in Buckingham House in 1764”. Detailed with over-the-top dark figures on light background marquetry veneer over the key well and interior. The exterior panels are veneered with figured burr walnut with walnut cross banding, including spine, indicating it was to be placed in the middle of a room. The detailed marquetry on key well, interior and jack rail features scrolling foliage, eagles, angels playing trumpets, and a  trophy  instruments in the center. The borders feature decorative dark banding with pale squares that is laburnum wood with the heart and sap wood both showing. Solid walnut trestle stand, carved cants leaves, four cabriole claw and ball feet. 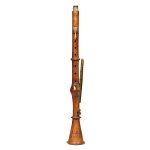