“Songs of Joy, Sorrow, and Hope”

Don’t miss this opportunity to hear a concert of songs performed by rising young tenor Johnnie Felder, accompanied by renowned veteran pianist Winifred Goodwin. Last year’s appearance by Dr. Felder filled the house and brought it down! The program will feature several premiere performances of recently composed songs by Gordon R. Goodwin, James T. Dargan, and Jon Grier, all on texts by Greenville poet Frank Clark dealing with the joys, tragedies, and exhilarations of the Black experience in America. This one is not to be missed!

Felder is a South Carolina native and holds bachelor and graduate music degrees from Benedict College and the University of South Carolina, respectively. He has also undergone extensive vocal training in the opera studio of the American Institute of Musical Studies in Graz, Austria; the American Singers’ Opera Project; and as a solo artist at the Varna International Music Academy in Varna, Bulgaria.

Winifred Goodwin is in demand as a chamber musician, orchestral player, and collaborative pianist. She has been the principal keyboardist with the South Carolina Philharmonic Orchestra since 1982, performing on piano, celesta, harpsichord, and synthesizer, and has been a featured soloist on a number of programs, including over one hundred fifty performances of Saint-Saens’ Carnival of the Animals. She has toured for the Southern Arts Federation and conducted a number of workshops for the United States Information Service in Latin America.

In addition to the standard repertory, Mrs. Goodwin specializes in new music and has premiered many works including several by composer/husband Gordon (Dick) Goodwin. Mrs. Goodwin holds two degrees in piano performance from the University of South Carolina where she served as staff pianist in the School of Music for many years. She has given recitals and recorded with a number of USC faculty members and collaborated with numerous guest artists from major orchestras, universities, and the NY Metropolitan Opera Orchestra. She also serves as pianist for Virginia Wingard Memorial United Methodist Church in Columbia. 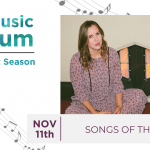 Songs of the Folk Concert at Sigal Music Museum 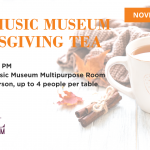