Join the Sigal Music Museum for a performance by Christopher Hutton, Deirdre Hutton and David Rhyne!

Deirdre Hutton has enjoyed an active career as a teacher, chamber musician, and orchestral player. She is Instructor of Violin and String Chamber Music at the South Carolina Governor’s School of the Arts and Humanities and interim Music Department Chair. She studied at the Eastman School of Music with Oleh Krysa, earned a Masters of Music at Northwestern University as teaching assistant to Roland and Almita Vamos, and pursued intensive private study with Itzhak Rashkovsky of the Royal College of Music in London. Deirdre is the violinist of the Poinsett Piano Trio, with which she has performed in the US, Germany, and New Zealand.

David was instrumental in bringing the South Carolina Bach Choir to Greenville in 2014 and has, since then, served as the founding artistic director for S.C. Bach, South Carolina’s Bach Society. 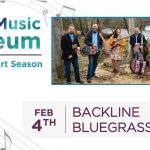